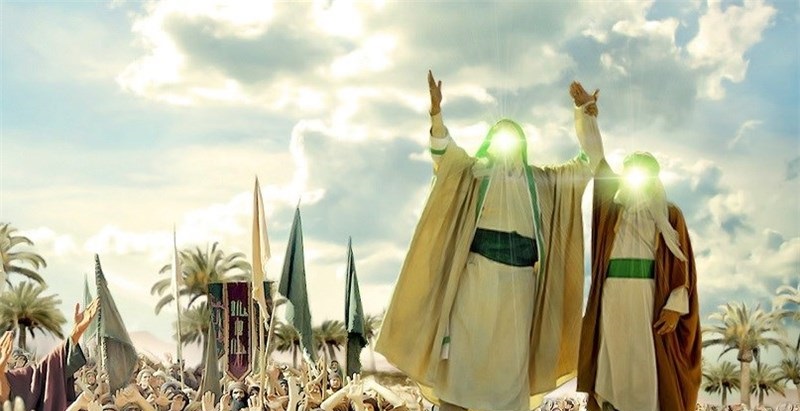 THE EVENT OF GHADIR

Ghadir Khumm is a location some miles from Makkah on the road to Madinah. When the Prophet (s) was passing by this place on 18 Dhu'l Hijja (10 March 632) on his return from the Farewell Pilgrimage, the verse "O Messenger, Proclaim what has been sent down to you from your Lord; and if you don't do it, you have not delivered His Message (at all); and Allah will protect you from the people (Qur'an 5:67) was revealed. He therefore stopped to make an announcement to the pilgrims who accompanied him from Makkah and who were to disperse from that junction to their respective destinations. By the orders of the Prophet (s) a special pulpit made of branches of trees was erected for him.

After the noon prayer the Prophet (s) sat on the pulpit and made his last public address to the largest gathering before his death three months later. The highlight of his sermon was when, taking Imam 'Ali (a) by the hand, the Prophet (s) asked his followers whether he was superior in authority (awla) to the believers themselves. The crowd cried out in one voice: "It is so, O Apostle of Allah". He then declared: "He of whom I am the master (mawla), of him 'Ali is also the master (mawla). O God, be the friend of him who is his friend, and be the enemy of him who is his enemy."

Immediately after the Prophet (s) finished his speech, the following verse of the Qur'an was revealed: “Today I have perfected your religion and completed my favor upon you, and I was satisfied that Islam be your religion.” (Qur'an 5:3) After his speech, the Prophet (s) asked everybody to give the oath of allegiance to 'Ali (a) and congratulate him. Among those who did so was 'Umar bin al- Khattab, who said: "Well done Ibn Abi Talib! Today you became the master of all believing men and women."

The complete version of the Ghadir sermon .PDF